What is a steam valve

What is a steam valve

What is a steam valve?

The steam valve is generally installed horizontally and controlled by the pressure behind the valve. When the pressure sensor detects that the valve pressure indication increases, the opening of the steam valve decreases; when the steam valve is detected, the opening of the steam valve increases to meet the control requirements.
Steam valve – the pressure reducing ratio of the valve must be higher than the system value to a certain extent; even at the maximum or minimum flow, it should be able to respond to the positive or negative action control signal. These valves should be selected for a useful control range of 20% to 80% of the maximum flow. It is normal to be equal proportion type or has equal proportion characteristic. These types of valves have the best flow characteristics and flow range required by proportional control. 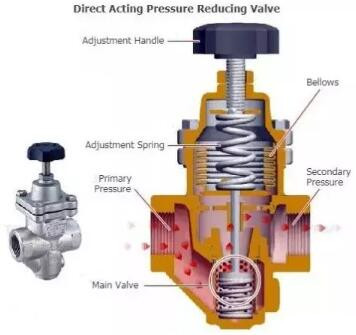 The output steam pressure is regulated by the balance force acting directly on the valve itself: the downward force generated by the compression regulating spring resists the upward force from the secondary pressure acting on the bottom of the bellows or diaphragm.

In the direct acting steam valve, the opening of the valve directly depends on the movement of the adjusting spring. If the spring is compressed, it creates an opening force on the valve, which increases the flow.
When the pressure accumulates downstream, the downstream pressure is transferred to the bottom surface of the adjusting spring (usually close to the bellows or diaphragm), where the upward force is balanced with the compression force of the spring. The spring pressure to open the valve is limited to achieve sufficient spring sensitivity while offsetting downstream pressure changes. The end result is a simple control of the pressure at the high flow rate that causes the pressure drop through the valve orifice.

For larger loads where very precise pressure control is necessary.
Advantages: compared with the direct acting type, it can control the pressure accurately and respond quickly to the load change, and can be used in a larger flow range.
Disadvantages: large size, high price.

Use of steam valve

The steam valve Y43H-16 is equipped with 0.05 ~ 0.4MPa, Y43H-25, 1 ~ 1.6Mpa, Y43H-40, 1 ~ 1.6Mpa, 1.6 ~ 2.5MPa adjusting spring, Y43H-64 and 1 ~ 3Mpa adjusting spring. The valve is equipped with 0.1 ~ 1MPa adjusting spring when leaving the factory, and the rest is attached with the valve. The user can choose according to the outlet pressure value.
The pipeline system must be washed and cleaned before installing the steam valve. In order to prevent welding slag, oxide skin, etc. from flowing into the valve, affecting the normal operation of the valve.
The valve should be installed in a place convenient for operation and maintenance, and it must be installed vertically on the horizontal pipeline. Attention should be paid to make the flow direction of medium in the pipeline consistent with the direction indicated by the arrow on the valve body, and do not reverse install.
When the steam valve is installed and used, the stop valve of the bypass pipeline should be opened to eliminate the mixture of condensate water and steam water in the pipeline, so as to prevent the steam valve from being damaged by garbage when the steam valve is opened. When there is no abnormal phenomenon, slowly rotate the adjusting screw clockwise to adjust the outlet pressure to the required pressure (based on the gauge pressure behind the valve). After adjustment, back tighten the lock nut, Screw on the protective cover.
A filter should be installed in front of the steam valve to prevent impurities in the medium from entering the steam valve and affecting its performance.
There should be a straight pipe before and after the steam valve. The length of the straight pipe in front of the valve is about 600mm, and the length of the straight pipe behind the valve is about 1000mm.
Generally, pressure difference between inlet and outlet of steam valve must be ≥ 0.2MPa.
The steam valve usually has various specifications such as dn50-dn 100, the working pressure before and after the valve is < 1MPa and 0.1-0.5mpa respectively, and the error of pressure regulating range is ± 5% – 10%.
It should be noted that although the water flow through the steam valve has a great head loss, it is still energy-saving in general because it reduces the waste of water, makes the flow distribution of the system reasonable and improves the system layout and working conditions.

As an important secondary energy, steam is widely used in many industrial fields. The coal consumption of steam system accounts for 1 / 3 of the output, which has become an important area of energy consumption. The steam trap is an important equipment to ensure the normal operation of steam, and it is an important self-control valve for condensate recycling and energy saving. There are many kinds of traps, which can be divided into floating ball trap, thermal static trap, thermal dynamic trap, inverted bucket trap, etc.
Safety rate is the estimated safety factor that can ensure the normal operation of the steam valve when the actual condensate production of the steam using equipment is in error with the marked capacity when determining the capacity of the steam valve. This kind of safety rate is not only stipulated in theory and can not be obtained by calculation, nor is it completely derived from empirical data. Generally speaking, the best way to consider the safety rate is to ask the steam valve manufacturer directly. If in the selection of steam valve, the safety rate of its selection is improper, so that the capacity of steam valve is too large or insufficient, it will have very bad consequences.

The safety rate is too high

The safety rate is too low

Why steam valve is needed in process control

Technically, a valve is a device used to control the flow of liquid or steam in any system. The main purpose of steam valve is to reduce the inlet steam pressure in the process. In addition to controlling the pressure, the steam valve also controls the temperature.
Boilers usually work at high pressure because low pressure operation causes water to be carried in steam. The low specific volume of high-pressure steam helps to reduce the weight of the pipeline. In fact, steam distribution becomes easier and cheaper due to the lower cost of piping and insulation materials.
Industrial processes use steam at lower pressures. The reason is that low-pressure steam has high latent heat, which greatly improves energy efficiency. The steam pressure is related to the temperature, so the temperature can be adjusted automatically by controlling the steam pressure. Reducing steam pressure is also related to the safety needs of the plant. Steam pressure can be controlled by steam valve.
In the equipment using steam, steam is usually generated under high pressure, and heat is provided for each steam user through local decompression. The purpose of the pressure reducing valve is to minimize the diameter of the steam transmission pipeline and make the steam transmission more cost-effective.

How to reduce steam pressure

A common way to reduce the pressure is to reduce the size of the steam passage by throttling. For the most basic decompression, the traditional stop valve can be simply installed in the fixed and partially open position, or the orifice plate can be inserted in the steam flow. However, any flow fluctuation will be accompanied by corresponding pressure fluctuation. To avoid this, a pressure reducing valve (PRV) can be used to precisely control the downstream pressure. These pressure reducing valves can automatically adjust the valve opening to ensure that the pressure remains unchanged even if the flow rate fluctuates.

By using the combination of start-up control valve, pressure sensor and controller, the pressure can be kept constant. However, the pressure reducing valve has the advantage of fully automatic independent operation to control the pressure without any type of external power. It can make extremely fast response action based on the immediate perception and adjustment of downstream pressure.

Benefits from enabling the heating process to use steam below boiler pressure. Therefore, the pressure reducing valve is usually used to reduce the steam pressure to the set value required by the process.

The shell test does not include diaphragm and valve cover.

The control valve does not work. The fault phenomena and causes are as follows:
1. No signal, no gas source.

2. There is air supply and no signal.

4. The positioner has air supply but no output. The orifice of the positioner is blocked.
5. Signal and no action.

The action of steam valve is unstable. The fault phenomena and causes are as follows:
1. The air source pressure is unstable.

2. The signal pressure is unstable.